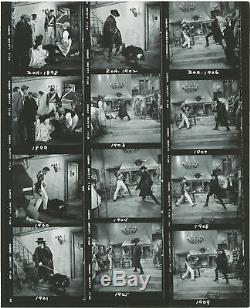 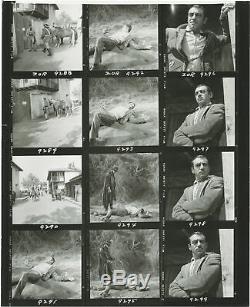 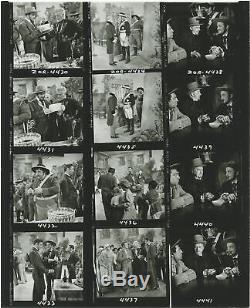 The contact sheets contain nearly 3000 stills and on the set shots from the television series. The three full sheet photos are locations, 2 interiors of a church and 1 of a courtyard. By the time Disney introduced his "Zorro" television series in October of 1957, the Johnston McCulley character from his 1919 story "The Curse of Capistrano" had already appeared in 4 feature films and 5 film serials. Disney's wildly popular children's series starred Guy Williams as the masked swordsman Don Diego de la Vega and ran for 2 seasons (78 episodes) and only ended because of ongoing financial disputes between Disney and the ABC network.

Two film compilations from the television series were made for theatrical release, 1958's "The Sign of Zorro, " which was edited from 8 episodes of the series, and 1959's "Zorro the Avenger" edited from 6 episodes. In 1960 and 1961 Disney created 4 new hour-long episodes which aired on the "Disney anthology television series" (at the time titled "Disneyland").

Very Good plus to Near Fine, light curling and some creasing, 9 contact sheets have had 1 to 3 images cut out. Subject: 1950s Cinema, Adventure, Contact Sheets, Family Film, Film Still Photographs, On the Set, Photographs, Television, Western. Royal Books is located in the midtown area of Baltimore, Maryland. Since 1996, we have specialized in rare books and paper relating to twentieth century literature, genre fiction, the arts, and popular culture, with a particular emphasis on cinema. All books noted as First Editions are also First Printings unless indicated otherwise.

This listing was created by Bibliopolis. The item "Walt Disney ZORRO Collection of 288 original contacts sheets with #146490" is in sale since Wednesday, March 11, 2020. This item is in the category "Entertainment Memorabilia\Movie Memorabilia\Photographs\1950-59\Color". The seller is "vanburenantiques" and is located in Baltimore, Maryland. This item can be shipped worldwide.