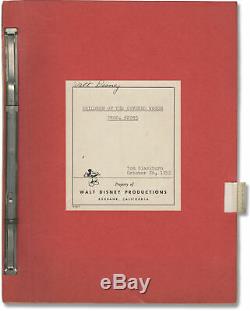 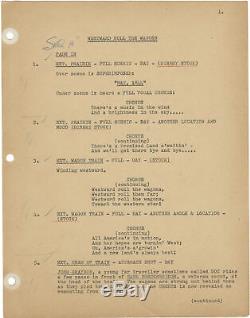 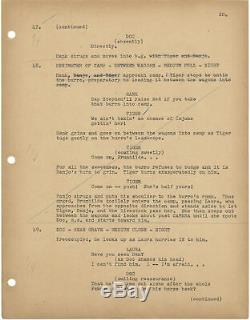 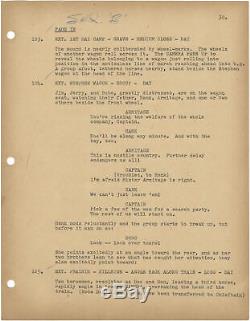 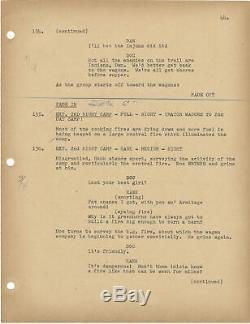 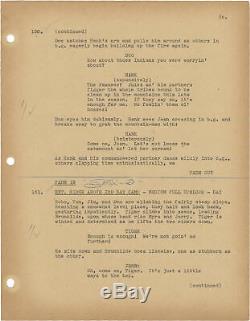 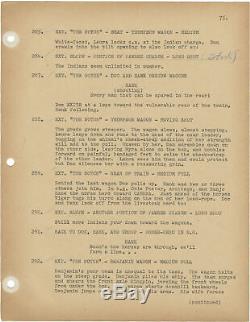 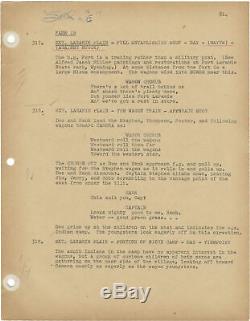 Description: Draft script for the 1956 film, here under the working title Children of the Covered Wagon. " Walt Disney's working copy, with "Walt Disney, in holograph ink on upper left margin of Walt Disney Productions label on the front wrapper (not in Disney's hand), and annotations in red, blue and graphite holograph pencil throughout, all clearly in Disney's hand. The most substantive of the annotations denote sequence order and use of stock footage. Our first reaction was to doubt such close involvement by Disney on a 1950s feature, but it turns out that this film was special: it was Disney's first Western, and only its second live-action CinemaScope feature, following on the heels of the wildly successful "20,000 Leagues Under the Sea" the year before.

Too, Disney's first animated CinemaScope feature, "Lady and the Tramp, " was released just prior to this film, in the summer of 1955. All three were major debuts for Disney, and Walt Disney's involvement was naturally more hands-on than usual. Based on the 1934 novel "Children of the Covered Wagon" by Mary Jane Carr, about a group of pioneers in a wagon train traveling across the West. Staring Disney stalwart Fess Parker, of "Davey Crockett" fame, as John "Doc" Grayson and featuring four Mouseketeers from the "Mickey Mouse Club" television series: Tommy Cole, Doreen Tracey, Cubby O'Brian and Karen Pendleton. A one-hour Disneyland telecast on November 14, 1956 entitled "Along the Oregon Trail, " included a behind-the-scenes look at the filming of Westward Ho the Wagons!

" and on the day of the film's opening, the first segment of a four-part series about Native Americans, entitled "The First Americans began on the Disneyland series. Set in the American West, shot on location at the Conejo Ranch near Thousand Oaks in California. Red titled wrappers with affixed Walt Disney Productions label as called for with Disney scripts from this era, with credits for screenwriter Tom Blackburn and production number 2093. 157 leaves, with last page of text numbered 153. Pages Near Fine, wrapper Near Fine, prong binding. Subject: 1950s Cinema, Family Film, Film Scripts, Films with Literary Sources, Western. Royal Books is located in the midtown area of Baltimore, Maryland. Since 1996, we have specialized in rare books and paper relating to twentieth century literature, genre fiction, the arts, and popular culture, with a particular emphasis on cinema. All books noted as First Editions are also First Printings unless indicated otherwise. This listing was created by Bibliopolis. The item "Walt Disney WESTWARD HO THE WAGONS CHILDREN OF THE COVERED WAGON #146249" is in sale since Thursday, January 30, 2020. This item is in the category "Entertainment Memorabilia\Movie Memorabilia\Scripts\Originals\Unsigned". The seller is "vanburenantiques" and is located in Baltimore, Maryland. This item can be shipped worldwide.