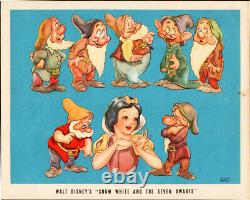 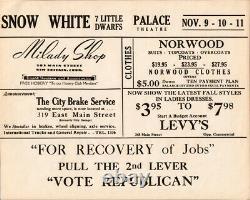 "; "Walt Disney's first full length feature production"; "The show sensation of the generation! "; "wondrously filmed in all the glories of the marvelous multiplane Technicolor"; "The Screen's Supreme Thrill! 1,000 artists worked three years to give you this once-in-a-lifetime show! A full hour and a half of the most enthralling entertainment you ever experienced...

Truly the miracle in motion pictures! Featuring the voices of Adriana Caselotti (in the title role as Snow White), Harry Stockwell (as the Prince), Lucille La Verne, Moroni Olsen, and Stuart Buchanan. EX condition corner edge wear, right border stain -still a hard to find piece in this condition Rare. 8 x 10 inches 2 sides. Packaged with thick cardboard insured sales of similar heralds. The item "Walt Disney's Snow White and the Seven Dwarfs Original Movie Herald 1936 Rare" is in sale since Wednesday, June 24, 2020. This item is in the category "Entertainment Memorabilia\Movie Memorabilia\Heralds". The seller is "memomine-com" and is located in San Jose, California. This item can be shipped worldwide.