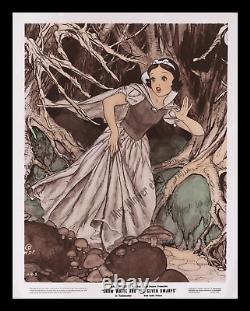 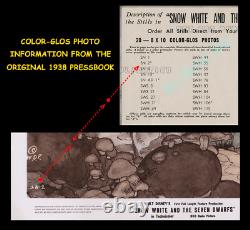 Up for sale is one of the rarest. WALT DISNEY 1930's PUBLICITY PHOTOS EVER RELEASED!

No question, this is the BEST and most difficult to find original 1938 Snow White still! This vintage gem was made at the height of Walt Disney's success, back in 1938 when Snow White and the Seven Dwarfs became the greatest sensation in motion pictures. The film made a fortune, and continued to make a fortune right up until this very day. If you calculate for inflation, this movie is the biggest box office success of all time, beating out all other classic films, including the likes of Star Wars and Gone With The Wind. Back when the film was originally released in 1938, Disney featured this artwork of Snow White on most of the premiere movie advertising paper.

Legendary Disney artist, Gustaf Tenggren, rendered this stunning image. This was the PRIMARY image used to promote the film. It's featured on a special one-sheet, and it's on the 22x28 and the14x36 insert.

You'll find a lobby card in the original set with this image too, and obviously they made this special COLOR-GLOS photo. Not all movies issued color-glos photos, only the biggest "A" quality studio productions. That's because making color-glos photos back in the 1930s was expensive and few theaters could afford the price of ordering them.

The amazing reality is that the price of this one color-glos photo was MORE than the price of a 1-Sheet. A 1-sheet poster would cost a theater 6 cents, but they charged 20 cents for this ONE color-glos photo (see photo #2). Needless to say, not many were ordered, and, almost NONE survived. This one example is the ONLY color-glos I've ever seen on Snow White.

And what a FINE example - it's in NearMINT ORIGINAL UNRESTORED CONDITION! The colors are unique and stunning. The choice of pastels are a stark departure from what you'd expect, making this one of the standout Snow White originals and one of the standout movie stills of all time!

You won't find a better one. I don't think another even exists. It can crash regardless of any decision you make and can even crash regardless of any decision made by the company related to the stock - Leaving you with a near worthless piece of paper that won't inspire anyone! The magnificence of art and historic documents have an inherent value that relates to civilization and society.

This vintage photo is definitely ECONOMY PROOF! Please write with any questions. If you're in the market for top quality original vintage movie posters or Star Wars, then please. This item is in the category "Collectibles\Disneyana\Vintage (Pre-1968)\Posters, Prints, Lithos".miniver" and is located in this country: US.