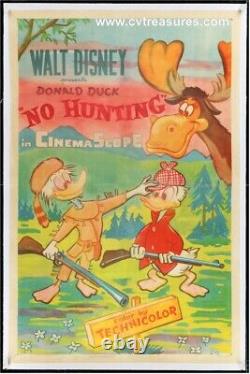 No Hunting, the 1955 Jack Hannah Walt Disney hunting sports animated animation cartoon comedy short (Donald and his grandpappy go hunting at the start of hunting season, and all the negative stereotypes about hunters and hunting are presented in a comical fashion) featuring the voice of Clarence Nash (as Donald Duck). Note that this cartoon was nominated for an Academy Award! Offered for the first time at CVTreasures is this colorful Disney one sheet, featuring the studio's favorite character of the 1940s and 1950s, Donald Duck.

A partially restored poster with bright color and a clean overall appearance. Has been professionally linen backed and looks Amazing! Donald Duck in No Hunting (RKO, 1955). One Sheet (27" X 41").

It's Cvtreasures first time to offer a poster for this Disney animation, which was the last of the Donald Duck cartoons to earn an Academy Award nomination for Best Animated Short. Based on director Jack Hannah's childhood experiences when hunting with his father, the film cleverly satirizes the opening day of hunting season as a chaotic war zone.

Trenches, paratroopers, bazookas, and even tanks are employed in the forest, depicting Hannah's memory that irresponsible hunters posed as much a threat to each other as they did to the animals. This poster has received professional corrections to fold wear and separation, pinholes, and to small chips and tears. Has been professionally linen backed and looks amazing! Note: Cvtreasures stamp Not on original. This item is in the category "Entertainment Memorabilia\Movie Memorabilia\Posters\Originals-United States\1950-59".

The seller is "cvtreasures" and is located in this country: US. This item can be shipped to United States, Canada.