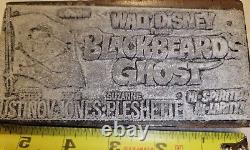 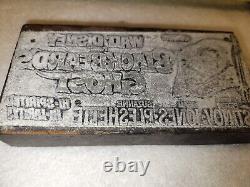 These were used by newspapers to print ads for movies. Once used, they were thrown away. Since nobody was into collecting 50 years ago, this could be a one of a kind. After accidentally reciting some magic words, track coach Steve Walker (Dean Jones) summons the ghost of the dreaded pirate Blackbeard (Peter Ustinov).

The spirit explains to Steve that he was cursed by his wife to roam the Earth until he performs one good deed. Since Steve is the only one who can h. Initial release: February 8, 1968. Starring: Peter Ustinov; Dean Jones; Suzanne Pleshette.

Adapted from: Blackbeard's Ghost. Distributed by: Walt Disney Studios Motion Pictures. This item is in the category "Entertainment Memorabilia\Movie Memorabilia\Posters\Originals-International\1960-69". The seller is "dape-8304" and is located in this country: US.