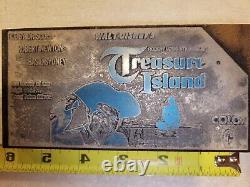 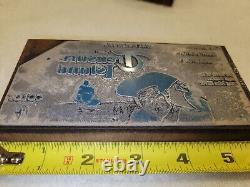 Walt Disney 1950 Treasure Island Zinc Movie Plate. Calling this rare is laughable. They did not print thousands or even hundreds. Made for newspaper movie ad use, they were thrown away when done with them. So at overc70 years old.

And possibly a ONE OF A KIND... You can own a piece of DISNEY, MOVIE and printing history.

Livesy (Denis O'Dea) and Squire Trelawney (Walter Fitzgerald) to prepare for the voyage. Along the way, tMore Release date:July 19, 1950 (USA) Director:Byron Haskin Starring:Bobby Driscoll; Robert Newton; Basil Sydney; Finlay Currie Adapted from:Treasure Island Distributed by:RKO Pictures Villain:Long John Silverfandom. This item is in the category "Entertainment Memorabilia\Movie Memorabilia\Ads, Flyers\1950-59". The seller is "dape-8304" and is located in this country: US. This item can be shipped to United States.