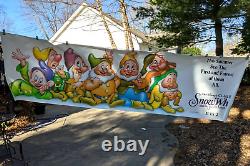 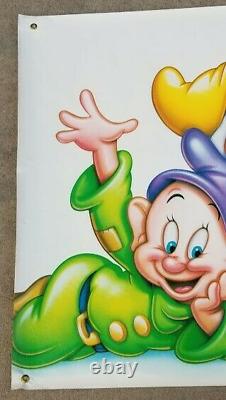 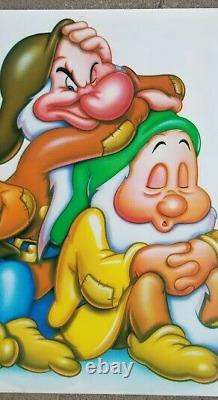 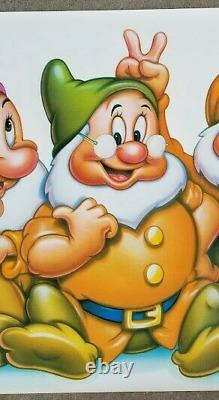 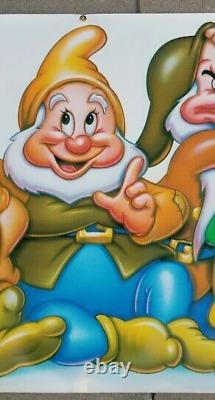 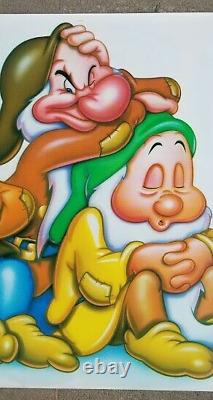 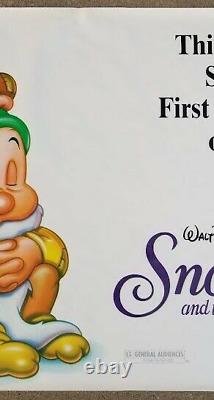 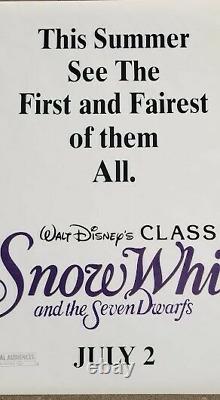 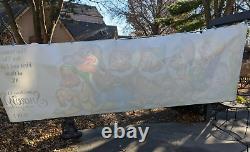 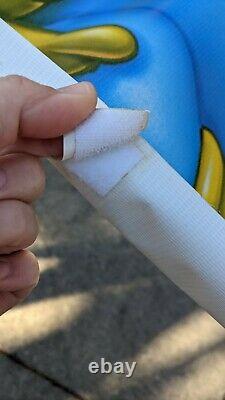 Vintage Disney Snow White Seven Dwarfs Movie Theatre Vinyl Banner Advertising. 121 inches long by 35 inches wide. A wonderful, rare and original, movie theatre lobby banner for the last theatrical release in 1993 of Walt Disney's animated classic that started it all - Snow White and the Seven Dwarfs. Classic and colorful artwork of The Seven Dwarfs make this a striking and impressive display for any home theatre or family room as well as an awesome addition to any Disney film memorabilia collection. A Disney film banner well worth the investment.

Snow White and the Seven Dwarfs was originally released in 1937 and was the first full-length cel-animated feature in motion picture history as well as the first animated feature film produced in America, the first produced in full color, the first to be produced by Walt Disney, and the first in the Walt Disney Animated Classics canon. Snow White and the Seven Dwarfs was one of only two animated films to rank in the American Film Institute's list of the greatest 100 American films of all time in 1997 (the other being Disney's "Fantasia"), ranking number 49. It achieved a higher ranking (#34) in the list's 2007 update, this time being the only traditionally animated film on the list. The following year AFI would name the film as the greatest American animated film of all time.

Re-released six times prior, this fabulous banner was produced for the seventh and final re-release to theatres of this animated classic in 1993. It is probably the only time a movie theatre lobby banner was created for this film and it will most certainly be the last time. Made of heavy vinyl and measures approximately 121 inches long by 35 inches wide. Banner is rolled and is in good condition as shown by the photos. There are "hook and loop" pieces on the back where the banner was originally attached to the theatre walls.

The 4 corners also have holes that can be used for hanging. There are a few places with discoloration, but they are very minor - I have taken close up photos so you can see vibrant colors and condition for yourself. Please use the zoom feature as well! This item is in the category "Collectibles\Disneyana\Contemporary (1968-Now)\Other Disneyana". The seller is "kefro1533" and is located in this country: US.