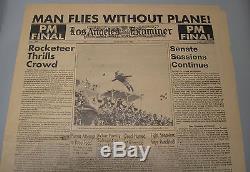 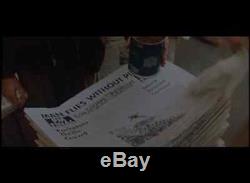 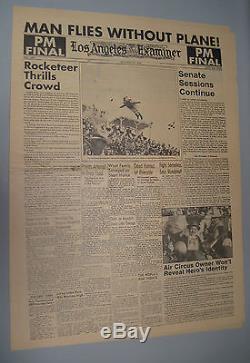 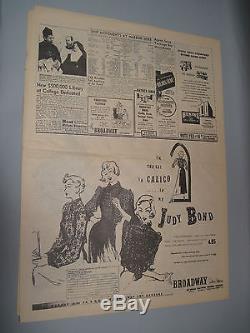 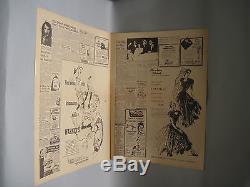 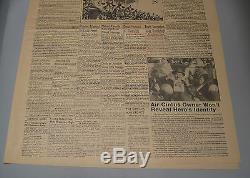 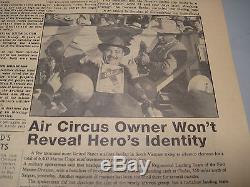 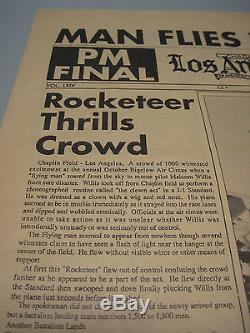 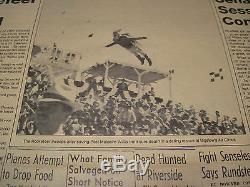 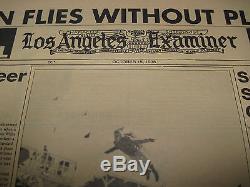 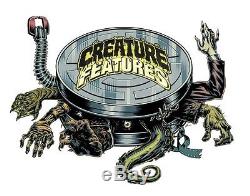 CREATURE FEATURES, your one-stop shop for high-flying sci-fi, fantasy & horror movie & TV collectibles, offers a rare chance to own a piece of Disney and Rocketeer history with this authentic, SCREEN USED original prop from the beloved 1991 adventure! The newspaper appears just after The Rocketeer makes his spectacular public debut at the Bigelow Air Circus. Created just for the film, this October 15, 1938 issue of the Los Angeles Examiner (a real newspaper at the time, and part of the William Randolph Hearst empire) features the headline MAN FLIES WITHOUT PLANE! And subhead ROCKETEER THRILLS CROWD, featuring a few paragraphs of story detailing the surprise appearance of pilot Cliff Secord as the Rocketeer, accompanied by picture and caption. In the lower right, the paper features the article AIR CIRCUS OWNER WON'T REVEAL HERO'S IDENTITY, featuring a photo of veteran actor Jon Polito as Otis Bigelow.

This ultra-rare treasure is in super condition for its 20+ year vintage, with only very light browning and no notable rips, tears, or holes. VThe front and back page are slightly misaligned, as seen in the pictures, but there's no additional crease at the fold, indicating that this is its original condition - it hasn't been refolded over the years. VThere's a small amount of notching at the edge of the back page, but this is unlikely to be visible when displayed (depending on how you wish to display it). VIt would be easily covered by any framing/matting. Certificate of Authenticity is included.

Check out our other auctions for more Rocketeer props and rare merchandise! This piece will be mailed flat, with plenty of cardboard to preserve it. Check out our 100% feedback. The item "THE ROCKETEER Original BIGELOW'S AIR CIRCUS Screen-Used Prop NEWSPAPER Disney" is in sale since Thursday, January 09, 2014. This item is in the category "Collectibles\Disneyana\Contemporary (1968-Now)\Other Disneyana".

The seller is "c-features" and is located in Arcadia, California. This item can be shipped worldwide.