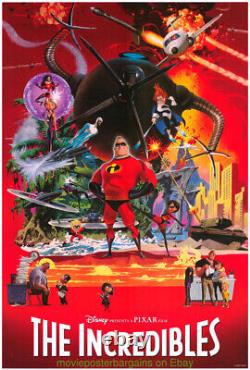 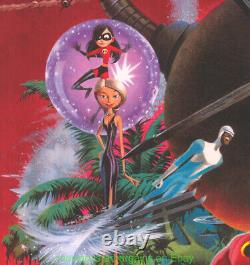 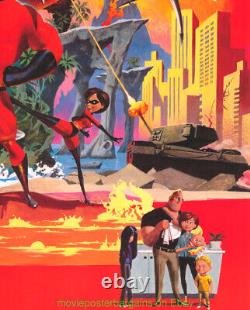 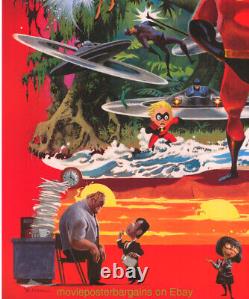 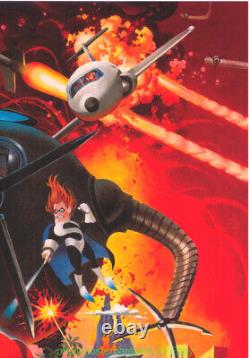 THE INCREDIBLES MOVIE POSTER 27x40 HYPER ULTRA RARE STYLE DISNEY PIXAR ANIMATION. I've included several close-up photo's of this poster. The one sheet is 27 by 40 inches. I believe this very rare one sheet was done for a give away to employees of Pixar and Disney, AND VERY VERY FEW WERE PRINTED compared to the usual 35,000 to 50,000 or even 100,000 one sheets printed for a major release, or as studio's do all the time they print a small batch to pass them around to executive's and decided not to use them. It actually costs almost the same to print 10 as it does to print 2000 as most of the cost is in the set up charges - but often the 2000 get stored away or thrown away.

I do have the other with the credits also but it is twice as much. This Disney animation / Pixar animated films stars the voices of Brad Bird, Samuel L. Jackson, Holly Hunter, Jason Lee, Spencer Fox and Craig T. Whatever it was for it is a original studio issued one sheet size movie poster dead on ultra sharp printing and clearly original and the artwork was done by the highly collected Robert McGinnis.

17th, 2013 Brad bird himself in his TWEETER account has announced this poster as having been unused for promotion of this film. In the aftermath of this Tweet many entertainment related news website's have carried this as breaking news. In fact in a very small way it was used for the promotion of the film, since this poster was perhaps not officially used according to Brad but this poster was printed by the studio and in quantity at the time of the film's release and has been around ever since. What happened to that large supply, as Yoda would say I know not, perhaps they are laying in a warehouse somewhere or perhaps they have been destroyed. THESE RATES ARE FOR USA CUSTOMERS ONLY! I don't sell unlicensed reprints, especially by misrepresenting them as original, all auctions are for theatrical distribution studio issued one sheet size 27 by 40 inch original movie posters unless otherwise noted.

For 90% of my auctions UNLESS the rates below are different - TAKE A LOOK!! RUSH ORDERS - LIKE NOT O. ABOUT THE POSTER PHOTO'S.

SOME EXAMPLES -A DATE IS CHANGED AT THE BOTTOM OF THE POSTER FOR THE RELEASE OF THE INCREDIBLE HULK BUT THE ONE I SENT WAS THE OLD DATE HE DIDN'T WANT. THE SHERLOCK HOLMES I SENT WASN'T THE ONE THAT HAS HOLMES FOR THE HOLIDAY'S TAG LINE ON IT HE WANTED. I GUARANTEE THE ARTWORK MATCHES THE PHOTO BUT NOT EVERY NUANCE BETWEEN THESE VARIOUS PRINT RUNS THAT THE STUDIO'S PUT OUT - SO THE PHOTO WILL CORRECTLY MATCH THE POSTER'S ARTWORK YOU RECIEVE BUT MAY HAVE A DIFFERENCE IN THE TYPE ON IT. More than just a pretty picture.

Make your listings stand out with FREE Vendio custom templates! FREE scheduling, supersized images and templates. This item is in the category "Entertainment Memorabilia\Movie Memorabilia\Posters\Originals-United States\2000-Now". The seller is "movieposterbargains" and is located in this country: US.