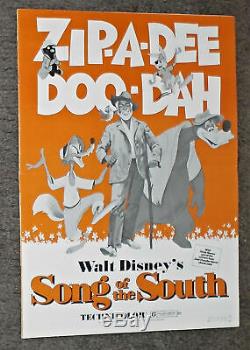 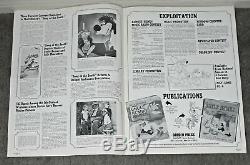 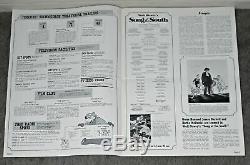 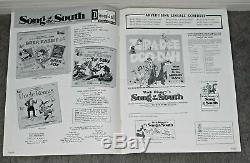 Song of the South R72 Pressbook. From the 1972 theatrical rerelease. An incredible snapshot of the way films used to be marketed, this is an.

Vintage 1970s-era pressbook printed on slick magazine stock not a copy! Song of the South, a film that has not been seen since its last official theatrical exhibition in the mid-1980s. Features EVERYTHING theatre owners needed to exhibit the film - a synopsis of the film, articles about the film and its source material (Joel Chandler Harris, Uncle Remus) the cast James Baskett, Hattie McDaniel, etc. And ads for local newspapers and magazines, ancillary marketing product like storybooks, vinyl records and more. It's a fascinating snapshot of an entire Madmen-like advertising campaign from nearly 50 years ago!

Fans will recognize the beloved characters from Disney's Splash Mountain. Brer Rabbit, Brer Fox, Brer Bear, who, along with. Are featured prominently on the cover, which is the key art from the R72 one sheet artwork. This unique piece would look fantastic framed. Pressbooks were never available to the general public.

They were distributed to theaters to run their newspaper and magazine campaigns to publicize the film's release. These days, everything is distributed online, making these valuable artifacts from a rapidly fading past.. PACKING : Packing is done by collectors for collectors. The item "Original Song of the South Pressbook Disney SPLASH MOUNTAIN Brer Rabbit R1972" is in sale since Saturday, July 4, 2020.