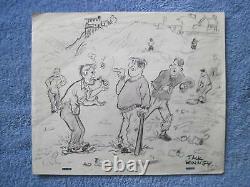 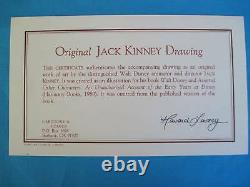 The drawing shows a game of baseball being played by the studio staffers which, among other competitive sports, was a regular feature of daily life and helped to relieve the tension and stress of work. Jack Kinney (1909 - 1992) was hired by Walt Disney in 1931, the early days of the Depression, to work at the Walt Disney Studio on Hyperion Avenue in East Hollywood. His beginning career includes his work on several shorts, including Santa's Workshop (1932), The Band Concert (1935), and Moose Hunters (1937). He went on to become a director of cartoons, working on the features Pinocchio and Dumbo, but he really shined in the shorts department, where his Goofy cartoons are among the best to come out of the Disney Studios. He received five Academy Award nominations and won an Oscar for the 1943 cartoon Der Fuhrers Face, the only Donald Duck film to win an Academy Award.

In 1959, Jack left Disney to start (with his brother Dick) Jack Kinney Productions, an independent animation studio. In his book Walt Disney and Assorted Other Characters. An Unauthorized Account of the Early Years at Disney, Kinney recounts the highs and lows of daily life as a member of the creative department at Disney, where the staff referred to themselves as inmates and the practical jokes and camaraderie provided rich material for the gags and scenes that they created for the screen. Working for Walt Disney could be as inspiring as it could be frustrating and his book presents an insiders perspective with great humor and candor. He puts it best in his introduction: These are my personal recollections of the Disney Studio where I worked for more than a quarter-century.

It is the story of the little people, the strivers, the doers. It is about the pranks, the gags, the human foibles we remember so lovingly, and about the growing pains suffered by all involved. The Golden Age of Animation was a glorious experience.