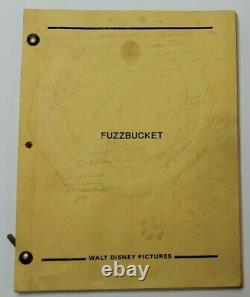 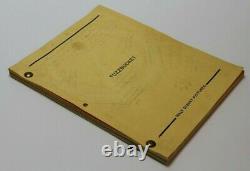 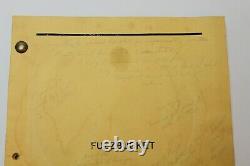 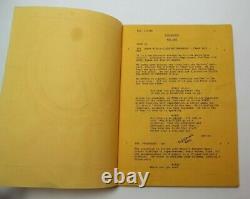 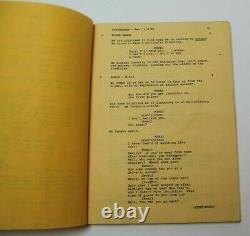 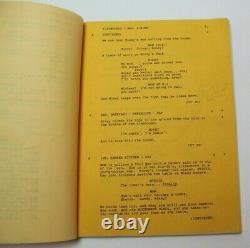 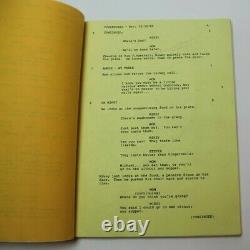 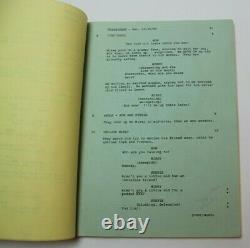 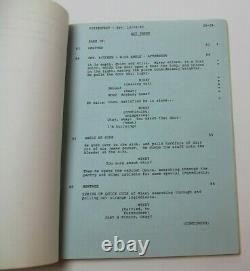 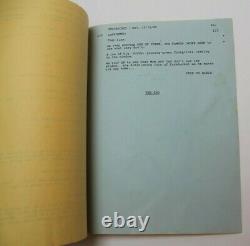 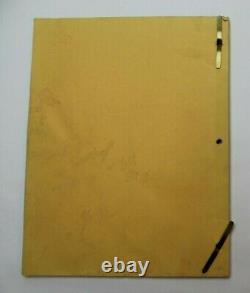 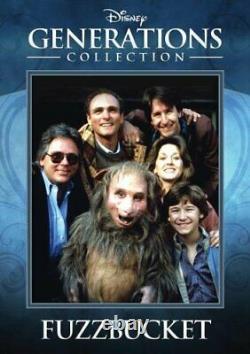 Script Last Dated: January 8, 1986. This is an Original Movie Script used during the making of the the 1986 TV Movie titled, "Fuzzbucket".

This script has the original yellow, Walt Disney Pictures, production cover. There is a large round water stain mark on the front cover, which appears to be from a wet potted plant being set on top of this script at some point during filming.

There are also some scattered water stain marks on the back cover. It has multi-colored revision pages inside and it is 60 pages long. There is no Title Page inside.

Some of the pages inside have pencil notation markings. Please view all of the pictures provided above.

It is in good overall condition. Fuzzbucket is hairy little creature that lives in the swamps of Dead Man's Marsh with many other fuzzbuckets. The character is called Fuzzbucket by Michael, but also is a fuzzbucket. It is not known whether all fuzzbuckets have different names or are strictly called fuzzbuckets. Michael Gerber is a 12-year-old boy and main character of the film. He is dealing with his first day of junior high and fitting in. Everyone in the film finds him odd or weird due to the fact they always think he is talking to himself, when he is in fact talking to Fuzzbucket. In a world where 12-year-old Michael Gerber has no friends, he finds that sometimes, the best friendships come from within. Michael is an awkward young boy who is about to start junior high and has no real friends. His only companion is an imaginary friend he calls Fuzzbucket. In the first act of the film, both the viewer and every character except Michael is left to make the assumption that Fuzzbucket is an imaginary friend. When Michael cooks up a strange, green concoction for his friend to drink, Fuzzbucket turns visible again. Astonished to see Fuzzbucket for the first time, young Michael becomes overjoyed.

His newly visible friend exuberantly leaps around Michael's treehouse in celebration. The two friends share a heartfelt moment in his treehouse when Fuzzbucket traces their hands with crayons, a ceremony that makes them blood brothers. At Fuzzbucket's urgent request for Toons! Michael switches on his television and the two sit together watching classic cartoons, and they soon drift off to sleep.

Hours later, Fuzzbucket wakens and insists on knowing the time. He urgently cries to Michael, How many clocks? Fearing that if he doesn't make it back home in time he will turn invisible again, only this time it will be forever. Fuzzbucket leaps out of the treehouse and escapes into the woods. Michael, afraid of losing his one and only friend, takes off after him.

POSTER IS NOT INCLUDED, IT IS JUST BEING USED AS A VISUAL REFERENCE. Specializes in rare and collectible movie scripts. Our scripts are genuine, authentic and screen used. We also carry movie props from no genre in particular. Furthermore, all of our items that are not props or scripts can be found in our Other Memorabilia category.

We do not sell reproductions or fakes. We have one of the largest collections of original movie screenplays in the world. We also carry scripts used in Television, Broadway, Radio and other forms of entertainment.

Every script that we own was hand-picked one at a time over the many years of which we have been collecting. A lot of people, new to collecting, are confused about the word Original. " In terms of movie scripts, the term "Original means that it was used by the production company in the early stages of production or that it was issued out to the cast and crew members during filming, and used at the time of production. Any scripts printed or used in any fashion after filming has completed are known as either a reproduction or a post-production script.

These two types of scripts are much less valuable and desirable. All of our scripts are Original. An original movie script has a lot of character in the item itself and every one of them is different in some way or another. There is usually only one script given to each crew member during production, however, sometimes they do get more than one. This makes original movie scripts very desirable because of how scarce they are.

Any changes made to the screenplay during production are known as revisions and these revision pages are inserted into that one script that was issued out to them. For example, if we are talking about a low-budget film with a small cast and only a few crew members, there are actually only a small number of scripts in existence around the world for that film. This aspect of collecting makes it fun but also difficult because there may be a certain writer or director that you love to collect and there may only be a handful of movie scripts that still exist from that specific film that you are looking for. We have some of the rarest movie scripts in the world. Each film project has a different total number of scripts that are issued. The older a film is you also have to figure in the fact that a lot of the original movie scripts have been thrown out or destroyed over time. We do our best to provide the widest selection of original movie scripts in the world. Whatever actor, producer, director, writer or specific film department you are looking for, we probably have a movie script related to the person you are looking for in some form or fashion. I know that there are a lot of items to search through, but there is definitely something for you.

Once you check off this little box it will allow you to search for a specific word that is contained in any of our listings' actual description. Here all of the original movie scripts will be categorized by decade, which will help you to narrow down what you are looking for by the year it was made. The item "FUZZBUCKET / Mick Garris 1986 Screenplay,'The Magical World of Disney' Creature" is in sale since Saturday, May 30, 2020.