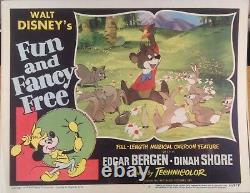 Lobby Card 11" by 14" from the 1949 Walt Disney Animated Cartoon Feature " Fun and Fancy Free " released by R. This is an Excellent condition Original U. Pictures release Lobby Card, NOT a reprint! It features Mickey Mouse and Bongo the Circus Bear! Which as you know is a very hard to find Disney Lobby Card!

Please Note: All the Lobby Cards we sell are Original Rare Lobby Cards that were made to be displayed in a movie theater in conjunction with the film, and some were actually used in a movie theater lobby while the film was being shown. This Lobby Card comes in an acid free clear protective envelope, and any reflections in the photo are from this clear plastic envelope. Celebrating 20 years on e-bay. The item "DISNEY RARE ORIG. FUN AND FANCY FREE VINTAGE LOBBY CARD #2- 1947- CARTOON" is in sale since Thursday, January 24, 2019.