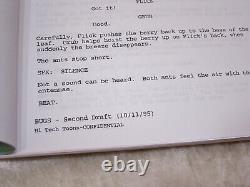 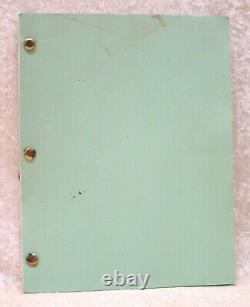 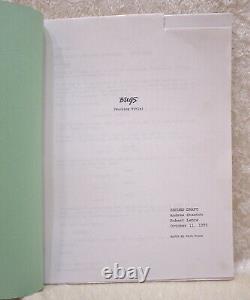 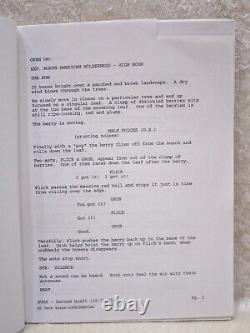 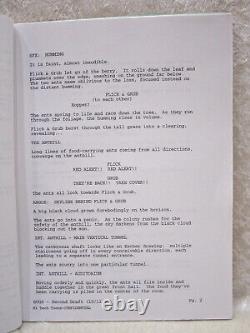 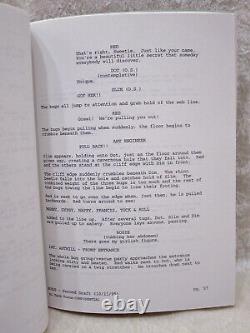 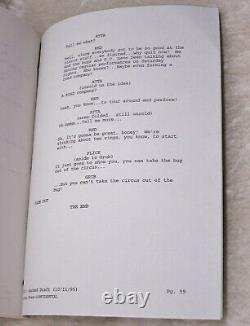 Original screenplay typescript, probably laser printed, plain green paper covers, 8.5" x 11", 3-hole punched, bound with 3 brass brads, 99 pages, printed on rectos only. The statement BUGS - Second Draft (10/11/95) Hi Tech Toons CONFIDENTIAL appears at the bottom of all the numbered pages. VERY GOOD Condition: title page and page 1 are clipped at the upper edge to remove previous owner's name, paper covers have light wear/small stains, and rust offsetting from the metal brads, the brads are rusty, some corner creases otherwise tight, bright, clean and unmarked. Hi Tech Toons was an early holding company for Pixar and Disney joint ventures. In 1995 the film was pitched to Disney under the title Bugs, an adaptation of Aesop's fable The Ant and the Grasshopper. Disney optioned the film and the script went through multiple iterations before it's release in 1998.

This October 11, 1995 Second Draft is an early version of the story before writer and co-director Andrew Stanton made fundamental changes - it features Red the Circus Bug Ant before his character became the protagonist Flik. Very few of this original early draft were made.

There are no early draft BUGS screenplays in commerce that I have ever seen. From a Mill Valley, California estate with early ties to ILM and Pixar. A Bug's Life (1998) is the first animated feature film created during the partnership between Pixar Animation Studios and Disney, it follows Pixar's groundbreaking film Toy Story (1995). Andrew Stanton, a Pixar veteran conceived the original story along with John Lasseter and Joe Ranft.

The film was directed by Lasseter and Stanton, and the screenplay was written by Stanton, Donald McEnery & Bob Shaw. Here is a relevant synopsis of the writing and production of A Bug's Life from Wikipedia: Production Development: During the summer of 1994, Pixar's story department began turning their thoughts to their next film. The storyline for A Bug's Life originated from a lunchtime conversation between John Lasseter, Andrew Stanton, Pete Docter, and Joe Ranft, the studio's head story team; other films such as Toy Story 2, Monsters, Inc.

And Finding Nemo were also conceived at this lunch. Lasseter and his story team had already been drawn to the idea of insects serving as characters. Like toys, insects were within the reach of computer animation back then, due to their relatively simple surfaces. Stanton and Ranft wondered whether they could find a starting point in Aesop's fable The Ant and the Grasshopper. Walt Disney had produced his own version with a cheerier ending decades earlier in the 1934 short film The Grasshopper and the Ants. In addition, Walt Disney Feature Animation had considered producing a film in the late-1980s entitled Army Ants, that centered around a pacifist ant living in a militaristic colony, but this never fully materialized. As Stanton and Ranft discussed the adaptation, they rattled off scenarios and storylines springing from their premise. Lasseter liked the idea and offered some suggestions. The concept simmered until early 1995, when the story team began work on the second film in earnest. During an early test screening for Toy Story in San Rafael in June 1995, they pitched the film to Disney CEO Michael Eisner.

Eisner thought the idea was fine and they submitted a treatment to Disney in early-July under the title Bugs. Disney approved the treatment and gave notice on July 7 that it was exercising the option of a second film under the original 1991 agreement between Disney and Pixar.

Lasseter assigned the co-director job to Stanton; both worked well together and had similar sensibilities. Lasseter had realized that working on a computer-animated feature as a sole director was dangerous while the production of Toy Story was in process. In addition, Lasseter believed that it would relieve stress and that the role would groom Stanton for having his own position as a lead director. Writing: In The Ant and the Grasshopper, a grasshopper squanders the spring and summer months on singing while the ants put food away for the winter; when winter comes, the hungry grasshopper begs the ants for food, but the ants turn him away.

Andrew Stanton and Joe Ranft hit on the notion that the grasshopper could just take the food. After Stanton had completed a draft of the script, he came to doubt one of the story's main pillars - that the Circus Bugs that had come to the colony to cheat the ants would instead stay and fight.

He thought the Circus Bugs were unlikable characters as liars and that it was unrealistic for them to undergo a complete personality change. Also, no particularly good reason existed for Circus Bugs to stay with the ant colony during the second act. Although the film was already far along, Stanton concluded that the story needed a different approach.

Stanton took one of the early circus bug characters, Red the red ant, and changed him into the character Flik. The Circus Bugs, no longer out to cheat the colony, would be embroiled in a comic misunderstanding as to why Flik was recruiting them. Lasseter agreed with this new approach, and comedy writers Donald McEnery and Bob Shaw spent a few months working on further polishing with Stanton. The characters "Tuck and Roll" were inspired by a drawing that Stanton did of two bugs fighting when he was in the second grade.

Lasseter had come to envision the film as an epic in the tradition of David Lean's 1962 film Lawrence of Arabia. This item is in the category "Books & Magazines\Antiquarian & Collectible". The seller is "gardenenvy" and is located in this country: US. This item can be shipped worldwide.